Donald Trump, thankfully is out of office. And some may have hoped the the COVID situation would get better with him gone. Except it hasn’t gotten better at all.

Governors in red states had tried their best to emulate Trump by fighting any kind of COVID mitigation. And Ron DeSantis has fought harder than any others. This has resulted in Florida becoming the epicenter of COVID-19.

Howard Dean, once the governor of Vermont doesn’t much care for DeSantis. In fact, he says the Florida governor is even more insane that Donald Trump.

Dean made the comments during a Friday appearance on Ari Melber’s MSNBC show. He told the host:

“Well, I am shocked by DeSantis. I never thought I would say this but I think he may be more of a lunatic than Trump ever was. Trump finally come around thinking the best thing he can do for his supporters is get them vaccinated. And DeSantis is completely out of touch with reality. I am not sure what he could possibly be thinking now when you got more than half the population that’s in school districts refusing to comply, long before the court said it was okay, more than half of the people in Florida’s school districts said no. We don’t care, shut up and go away. This guy is not – if you are the governor, you can’t do that.” 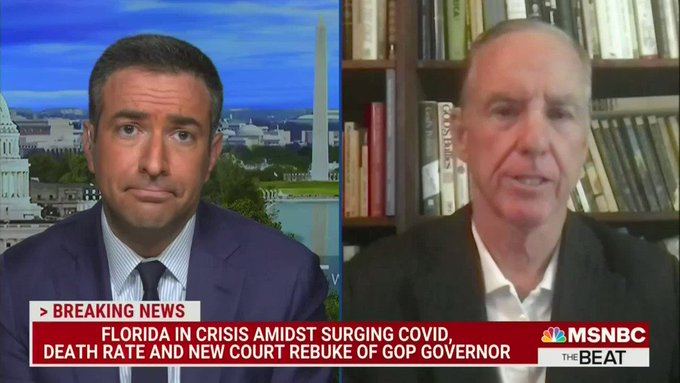 Dean continued, “this guy is putting their children’s lives at risk. We’re going to have dead kids all over Florida in these districts that are following DeSantis. It is outrageous. I have never seen any governor of either party ever behave like this. It’s almost as if he doesn’t give a damn who has to die as long as he gets reelected.”