Although Biden is not directly responsible for passing legislation––that duty falls to Congress––Scalise is of the opinion that the President can’t support a spending bill championed by the Democrats while also continuing to keep his eyes on the ever-evolving security situation in Kabul.

“I think what was the most disgraceful thing about this week, in addition to the president of the United States cowering to a terrorist organization the Taliban, getting — going off on their timeline instead of saying we’re getting every single American out,” Scalise said.

“There are thousands of Americans that President Biden stranded behind enemy lines and instead of spending every minute working to get them out, he put a shot clock on them saying there’s only seven days left to get all Americans out,” he added.

Scalise went on to say that Biden “was wasting precious time this week, burning the phones up, pressuring Democrats to vote for a $5 trillion spending bill and tax bill.”

“That’s what he was wasting time on. Every minute of his day should be getting all Americans out. Because we’re going to look back after the timeline that shouldn’t be in place is passed and we’re going to know that there are Americans still behind enemy lines and he wasted time just trying to pressure to get a tax and spend bill passed through Congress this week instead of trying to get every American out, which is his main responsibility,” he said. “That’s the oath he took.”

People will look back at this week and ask what Democrats in Congress were doing while Americans were stranded in Afghanistan. The answer is they were busy ramming through another multi-trillion dollar liberal spending bill. Nothing on Afghanistan. Shameful. https://t.co/CynOklLe2n 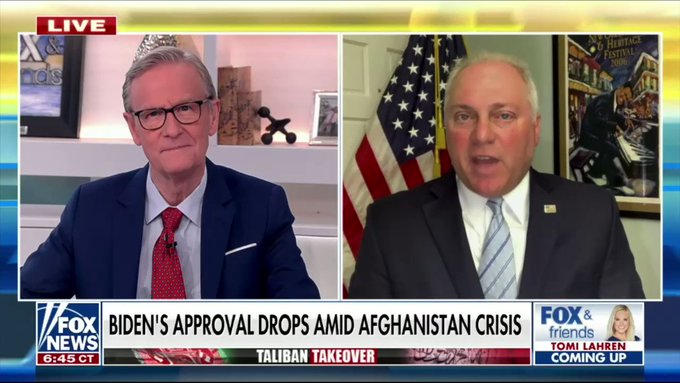 Scalise has been criticized by people who’ve noted that the duties of Congress and the executive branch are separate.

@SteveScalise @All435Reps What exactly should Congress be doing? Field trips to Kabul? Pulling military officials out of Afghanistan to give briefings? Appropriating tens of billions of dollars to DoD that won’t be useful to this effort?

@SteveScalise US is getting out of AFG & trying to aid US masses' health & financial recovery & toxic waste clean up of heavily subsidized industries. It galls SKKKalise & fascists GOP almost as much as trying to save lives with masks & vaccines when a little blood money is still to be had.

@SteveScalise Yep. Everything else doesn't stop because of a single crisis. If you can't handle that you're not right for that job.

@SteveScalise what exactly was congress supposed to do that would help? what law needs to be passed to improve the situation there?

Earlier this week, the White House announced that since August 14, the day before Afghanistan fell to the Taliban, “the U.S. has evacuated and facilitated the evacuation of approximately 37,000 people.”