Reps. Seth Moulton and Peter Meijer Used A Flight For Evacuees To Get Out Of Kabul

In a move that is being widely criticized on both sides of the aisle, Reps. Seth Moulton and Peter Meijer used an evacuation flight to get out of Kabul after their secret trip.

The Two Members Of Congress Made An Unauthorized Trip To Kabul

The cloak-and-dagger trip infuriated some officials at the Pentagon and the State Department, where diplomats, military officers and civil servants are working round-the-clock shifts in Washington and at the Kabul airport to evacuate thousands of people from the country every day.

“It’s as moronic as it is selfish,” said a senior administration official who spoke on the condition of anonymity to provide a frank assessment of their trip. “They’re taking seats away from Americans and at-risk Afghans — while putting our diplomats and service members at greater risk — so they can have a moment in front of the cameras.”

The two congressmen released a statement defending their secret trip. 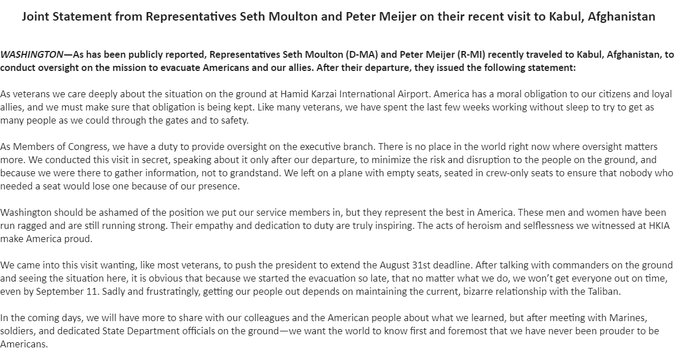 A Grandstanding Publicity Stunt That Backfired On Moulton and Meijer

The trip was an example of congressional entitlement at its very worst. The two House members took an unauthorized trip to Afghanistan for attention.  They couldn’t do any real fact-finding on such a short trip. The trip was designed to get their names in the headlines.

The two apparently never thought about the fact that their trip would cause resources to be diverted away from Americans and Afghans who are trying to flee the country.

The trip was unpatriotic, selfish, and stupid.

Both members should have done what others in Congress are doing. They should have been working 24 hours a day to get people out of Afghanistan. Instead, their trip jeopardized Americans and Afghans for a photo-op.