Nikki Haley is trying to blame the Afghanistan surrender on Joe Biden instead of herself and all of the members of the Trump administration.

Nikki Haley, who was part of the Trump administration that allowed the Taliban to get stronger, accuses Joe Biden of surrendering on Afghanistan. If she wants to see who is responsible for the surrender, she needs to look in the mirror. https://t.co/XjavbCMMC6 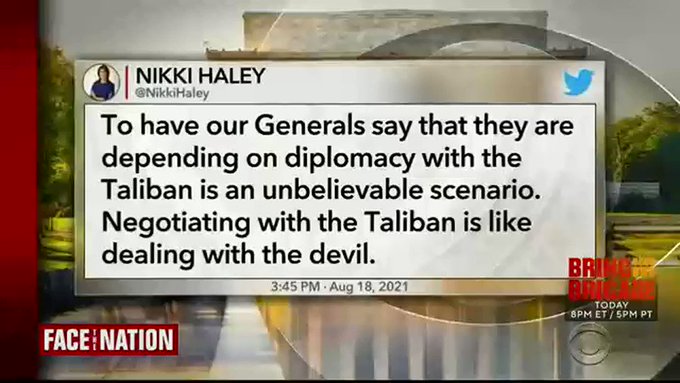 Transcript of Haley on CBS’s Face The Nation:

FORMER US AMBASSADOR TO THE UNITED NATIONS NIKKI HALEY: I agree with you. They’re not negotiating with the Taliban, they’ve completely surrendered to the Taliban. They surrendered Bagram Air Force Base, which was a major NATO hub. They surrendered $85 billion worth of equipment and weapons that we should have gotten out of there. They have surrendered the American people and actually withdrew our troops before they withdrew the American people. And they’ve abandoned our Afghan allies who kept people like my husband safe while they were overseas deploying. So, no, there was no negotiating. This was a complete and total surrender and an embarrassing failure.

MAJOR GARRETT: Someone you know well, the former secretary of state in the Trump administration, Mike Pompeo, stood alongside one of the Taliban founders and helped negotiate this deal in which President Trump signed an agreement to have United States forces out earlier this year. Did that set in motion what we’re seeing now?

AMB. HALEY: You know, I think everybody’s wanting to go back and talk about Trump. The truth is, under four years of Trump, Afghanistan was safe. We made sure that we kept terrorism at bay and that we came from a strength of position. What’s happened in seven months of Biden is we’ve completely surrendered and we’ve humiliated ourselves in the eyes of the world. The thing is, there are times where you have to negotiate with the devil, but you negotiate with the devil from a point of strength. You don’t do it from a point of weakness. We literally have no leverage right now with the Taliban. All we’re going to see them do is they’re going to buy time and act like they’re going to be nice until August 31st.

Nikki Haley’s revisionist history and tough talk on Afghanistan are all a part of her plan to run for the 2024 Republican presidential nomination. Haley has been plotting her presidential run since she left the Trump administration. The problem is that Republican primary voters will never support Nikki Haley.

Trump surrendered and tried to keep Afghan allies from coming to the United States.

That is Donald Trump and Nikki Haley’s record, and why she and the other servants to the most corrupt president in history have no shot over ever becoming president.

The Lincoln Project To Come For Greg Abbott With New Ethics ...

Here Is What Is Likely In President Biden’s Build Back Bette...

1/6 Committee Is Investigating If Domestic Terrorists And Fo...