House Minority Leader Kevin McCarthy (R-Calif.) vowed to stop Democrats in Congress from passing infrastructure and social spending plans that amount to the biggest expansion of the social safety net and climate programs yet.

However, McCarthy could not elaborate on how he would stop these plans from taking effect after Democrats came to an agreement and approved a $3.5 trillion budget blueprint that advances them.

“It’ll be over my dead body, because I’m going to do everything in our power to stop it,” McCarthy said during an appearance on CNBC’s “Squawk Box.”

He suggested that moderate Democrats Joe Manchin (W. Va.) and Krysten Sinema (Ariz.) could possibly roadblock the legislation but admitted he doesn’t know if he can derail the legislation altogether.

“I don’t know yet, until the vote takes place,” he said.

"They'll probably even get more. The far left is much stronger. You watch Cori Bush, you watch what AOC does. They hold this Democratic Party hostage to their socialist beliefs and they have won time and again," says @GOPLeader on Democratic bills. https://t.co/YKR7YLykTP 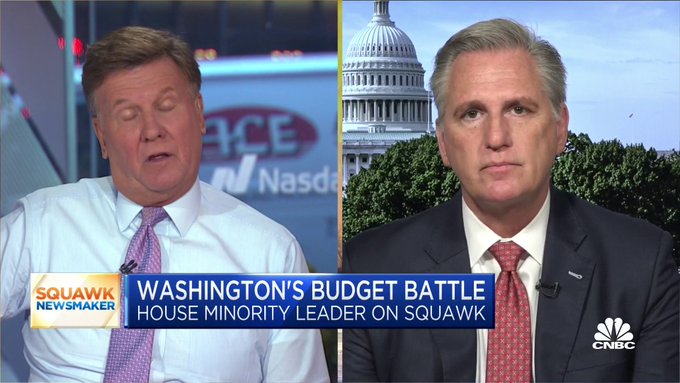 The budget blueprint passed 220-212 on Tuesday night in a special session convened during the August recess.

Sen. Elizabeth Warren Calls Out Facebook As A Threat To Demo...

Democrats Are Rolling Toward History As Schumer Says Build B...

The Dam Breaks As At Least 5 Former Trump Officials Spill To...