“President Biden’s weak leadership damaged our reputation, emboldened our enemies, and—most distressingly—left thousands of American lives in hostile territory with no guarantee of safety,” McCarthy wrote. “He has failed in his most basic responsibilities as commander-in-chief.”

President Biden’s weak leadership damaged our reputation, emboldened our enemies, and—most distressingly—left thousands of American lives in hostile territory with no guarantee of safety. He has failed in his most basic responsibilities as commander-in-chief. https://t.co/Vn4H1NVNJg 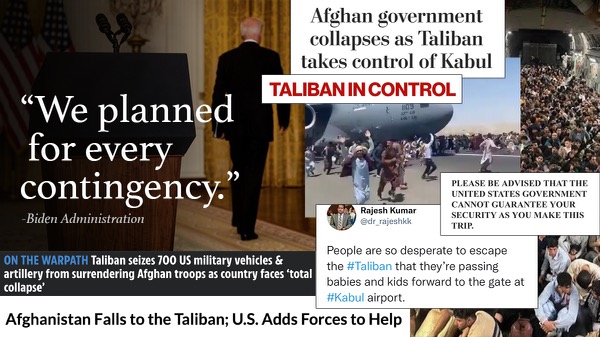 McCarthy was swiftly criticized; people pointed out that the Trump administration had brokered the peace deal with the Taliban.

McCarthy you and Trump administration lack of leadership with your stupid peace deal with Taliban and excluding the past government with no proper exit strategy caused this problem where was your big mouth then you Trump ass licker. Your disgusting. https://t.co/tKxieTePw2

Trump Released 5,000 hardcore extremists are now rampaging across the country, terrorizing women especially. But tell me more about how Republicans stand for law and order/ #GOPHypocrisy https://t.co/7mtr8SaXPK

Gaslighting again I see. Trump is the one who released 100's of terrorists. Get another job. https://t.co/vc0VT8lmq7

McCarthy earlier this week called for a congressional probe into the Biden administration’s withdrawal.

“How does the rest of the world look at us?” McCarthy told Punchbowl News. “They like that the president doesn’t tweet, but they don’t think America is very tough.”

The New York Post noted that McCarthy “largely remained quiet when Trump called for troops to be brought home from Afghanistan and the former administration’s push for a meeting with the Taliban at Camp David.”

Inherent Contempt Could Be Coming For Trump And His Cronies ...