McLaren's Daniel Ricciardo clearly has one eye on UFC 266 ahead of the Russian Grand Prix.

The Australian F1 star sent a shout out to Aussie champion Alexander Volkanovski, who will put his featherweight championship on the line against former title challenger Brian Ortega in the main event.

"Volk it's time mate, we've been hanging out for this one," he said in a video posted on social media.

"I know you can't wait to get back in there, looking forward to seeing you do your thing.

"Relentless pressure, foot on the gas, start to finish. It's going to be a good one. We got your back mate. Get after it."

Volkanovski will make his second title defence against Ortega, who he was supposed to fight earlier this year before testing positive for COVID-19.

Tensions are high between both men after they competed as rival coaches on the The Ultimate Fighter. 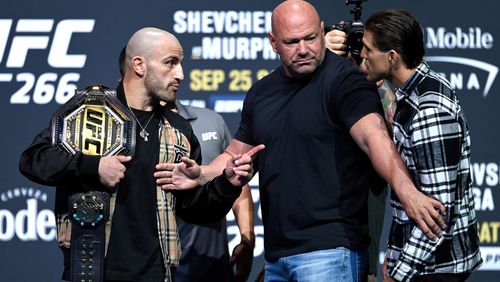 Other impressive fights on the main card include Valentina Shevchenko defending the women's flyweight championship against Lauren Murphy, while hardcore MMA fans get a chance to see Nick Diaz in action again.

Diaz, 38, hasn't competed under the UFC banner since a fight with Anderson Silva nearly seven years ago.

In an interview with ESPN on fight week, Diaz admitted he really doesn't want to fight and that he tried to get away from fighting over the last six years, but was pulled back because that's the only thing he can do for himself.

When asked if there was anything about the comeback he could enjoy, he instantly responded, "No. Nothing." 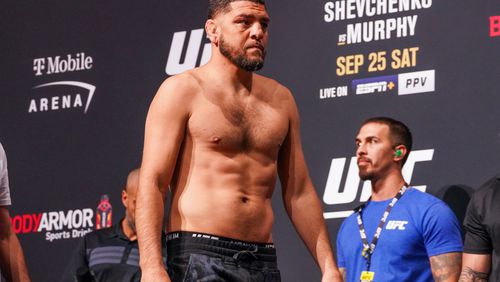 Those comments would be viewed as a red flag for any promoter, especially on fight week, but UFC boss Dana White said the Diaz brothers are different.

"The mainstream media doesn't know Nick Diaz like we know Nick Diaz," White told reporters on Friday (via ESPN MMA). "You never know what to expect when you walk into fight week with Nick.

"When you talk to him he's very Tyson-eque. He reminds me of Tyson," said White. "When you talk to Tyson and when Tyson is not in the right mood he'll tell you all the things that he hates about fighting.

"When he's in the right mood he'll tell you all the things that he loves about fighting. He has this love-hate relationship with the fight game like Mike does. They're very similar in the way that they speak and if you catch them in the right mood."

NSW star rockets into Test frame with 6-for