The Canberra Raiders have been dealt a favourable hand in their top-eight aspirations, coming up against a depleted Manly outfit tonight following the loss of Tom Trbojevic.

It's a stroke of fortune for the Green Machine who last week squandered a golden opportunity to topple the Melbourne Storm.

Adding to their luck, the Titans' loss last night means a win for the Raiders tonight will see them leapfrog into eighth position with finals just around the corner. 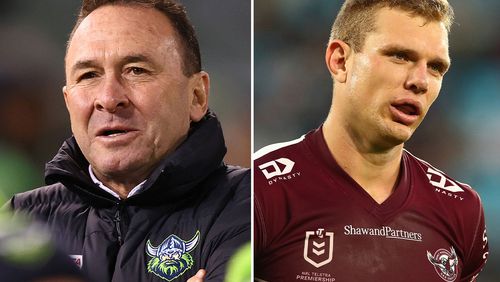 Trbojevic is sitting on the sidelines after suffering a knock to a prior facial injury last week against the Eels.

There were conflicting reports that the fullback was good to go for round 23, but under further medical assessment, the decision was made to rest the superstar.

In a further boost for the Raiders, speedster Charnze Nicoll-Klokstad returns tonight after a big lay-off after suffering a neck injury earlier this season.

Finals hopes and top-four aspirations on the line!

Stewards reveal how controversial Cox Plate call was made