Tariq Sims has been handed the Dragons captaincy ahead of their must-win clash against the Roosters this afternoon, despite initial reports Jack de Belin was set to don the armband.

According to coach Anthony Griffin, De Belin was discussed but never truly considered for the St George Illawarra captaincy.

And in a late switch up ahead of the Red V's must-win clash against the Roosters, with their finals hopes hanging by a thread, Sims has now been elevated to the captaincy. 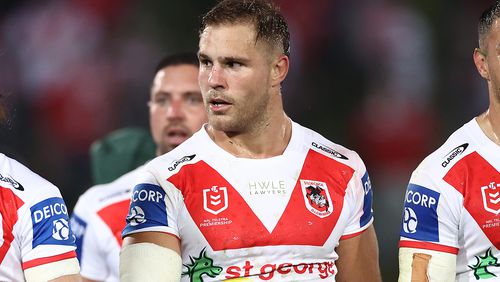 "Everyone understands what has happened the last four or five weeks at our club," Griffin said. "We've been down that road, we've dealt with it, the point moving forward is it's been dealt with. Tariq Sims is our captain this weekend."

Asked about reports that de Belin had been touted as captain, Griffin said: "I heard that, too. Tuesday afternoon we ran through a few names. There was a story made out of it."

Griffin said de Belin was "a leader" within the squad, "but Tariq Sims is our captain on Sunday and it's a great honour for Tariq. He's a local boy and we celebrated his 200th game a couple of weeks ago".

Stewards reveal how controversial Cox Plate call was made