Kinzinger: Trump Administration’s Agreement with Taliban “Set This Up to Fail”

Speaking on CNN, Representative Adam Kinzinger (R-Ill.) said that the Trump administration’s agreement with the Taliban to withdraw from Afghanistan set the ongoing evacuation process “up to fail.”

“Let’s keep in mind, [former Secretary of State] Mike Pompeo met with the Taliban. As Donald Trump was publicly saying, ‘We have to get out of Afghanistan at all costs. It’s not worth it,’ Mike Pompeo meets with the Taliban and tries to negotiate something,” Kinzinger said on “State of the Union.” “They set this up to fail. But always, of course, Joe Biden could have easily turned this around, and instead used it as the excuse to get out.”

Kinzinger said that “both parties have failed the American people and it can’t continue. And it particularly can’t continue with just pointing fingers while America is embarrassed in front of the world.”

You can hear Kinzinger’s remarks in the video below.

.@RepKinzinger (R-IL) calls Republican "fear-mongering" about Afghan refugees "non-American." Kinzinger to Republicans who do this: "a) you are either evil at your heart yourself or b) you're charlatan who's only interested in winning an election..." https://t.co/HRhBCcdoOa 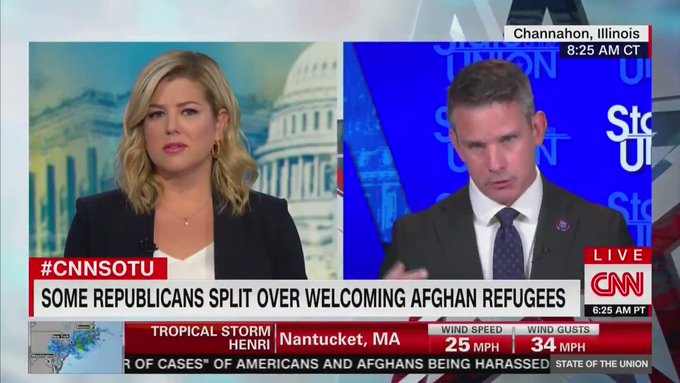 “When the Taliban pushed on the Trump administration, we pushed back even harder and imposed real cost and when the Biden administration pushed, they withdrew to a commercial airport that in no way has the capacity to get our people out with the speed that needs to happen to keep them safe,” Pompeo said during an appearance on Fox News.

He added: “This is an incompetent method of getting our folks out and presents real risk. I pray that we get them all home but I’m watching today even now they haven’t yet organized in a way to push the American power out in a way to make sure that we can get Americans out of the country.”

Commenting on Pompeo’s remarks, PoliticusUSA’s Jason Easley says, “Joe Biden is cleaning up Trump and Pompeo’s mess. New polling shows that the withdrawal is not hurting Biden’s popularity. Mike Pompeo’s lies and working, as it is clear that by blaming Biden for something that a majority of Americans want, Pompeo isn’t scoring political points. He is reinforcing the failures of the Trump administration.”