Kevin McCarthy Faceplants As He Tries To Blame Pelosi For Afghanistan

House Minority Leader Kevin McCarthy put on his serious voice and blamed Speaker Pelosi for the withdrawal in Afghanistan.

Kevin McCarthy is out here trying to blame Speaker Pelosi for Afghanistan without mentioning a word about the guy who surrendered to the Taliban before leaving office, "Pelosi worked late into the night while we were here but nothing to do with Afghanistan." https://t.co/E4QfJSpsrc 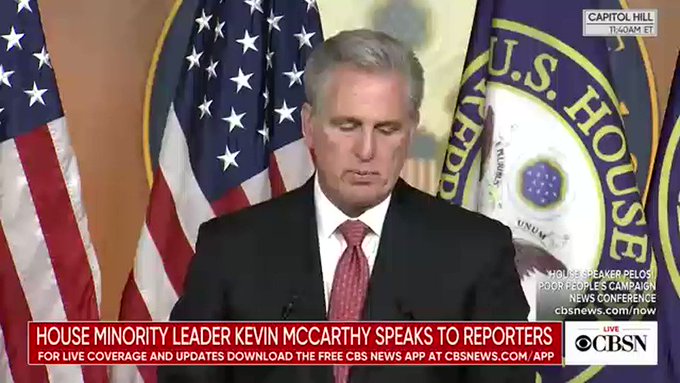 McCarthy said, “Speaker Pelosi called an emergency session just this week. And we were not the only country to do so. In the UK, they called the parliament back, but the difference in the UK is the focus was on their citizens in Afghanistan and getting them out. Pelosi worked late into the night while we were here but had nothing to do with Afghanistan. Speaker Pelosi asked the help of the president to make phone calls not to pass any bills to put resources to get more Americans out of Afghanistan. It was to pass close to $5 trillion. Not to debate it but to deem it. Every single Democrat voted for that.”

McCarthy was trying to blame Pelosi for not doing enough to get Americans out of Afghanistan, but there have been zero reports that the military has a resource problem. The military has plenty of resources, and the Pentagon has not asked for more.

The Speaker of the House has nothing to do with the withdrawal from Afghanistan.

Kevin McCarthy Is Really Bad At This

Over the past decade, House Republicans have gone from John Boehner, who was undercut and pushed out by radicals in his own caucus, to Paul Ryan, who was also pushed out by the far-right, to Kevin McCarthy.

There has been a clear talent drain in the House Republican caucus, and now they are left with McCarthy, who is in way over his head.

Kevin McCarthy is not a great communicator or unifier of Republicans. He is cravenly ambitious but has the backbone of a bowl of oatmeal.

Minority Leader McCarthy isn’t good at this. His attacks and criticisms aren’t believable, and every time he tries to step up to take on a true political heavyweight like Speaker Pelosi, he falls flat on his face.

Kevin McCarthy, as the potential Speaker of the House, is a trainwreck waiting to happen.