“This is to protect the safety of our students,” she added. “So we are trying to explain this to the commissioner as well as the governor and this is something that we need in order for classes to run face-to-face.”

Florida school superintendent Dr. Carlee Simon on defying Gov. Ron DeSantis’ (R-FL) ban on mask mandates: “It would be just as though we were asking a student to wear a baseball helmet when they go up to bat at a baseball game.” https://t.co/HCxFkzAIki 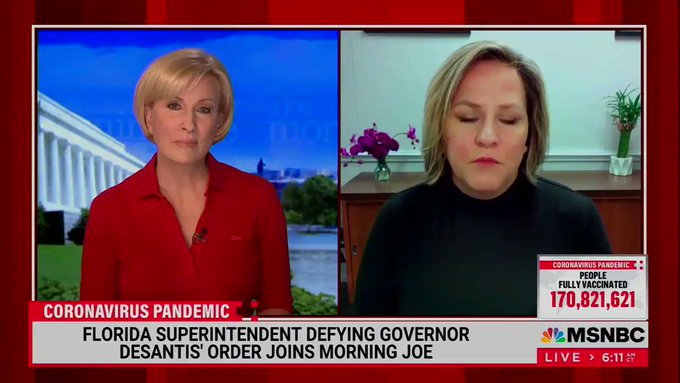 Earlier this month, DeSantis walked back his threat to slash the salaries of school officials who impose mask mandates in defiance of his executive order.

His spokesperson said “activist, anti-science school board members” should dock their own salaries if the state imposes financial sanctions on their districts.

“Those officials should own their decision — and that means owning the consequences of their decisions rather than demanding students, teachers, and school staff to foot the bill for their potential grandstanding,” said Christina Pushaw, the governor’s press secretary.

“The issue is that … superintendents and school board members are not state employees. Therefore, the only way the state could tailor the financial penalty would be to withhold an amount of funding equal to their salaries,” she added. “In that event, it is possible that the officials who are violating the law could decide to take funding from other needs in their own district, in order to pay themselves salaries. It wouldn’t be fair to the students, but it would technically be possible.”