Biden’s economic plan is working as new unemployment claims have dropped 60% to their lowest level in 18 months.

Via The White House: 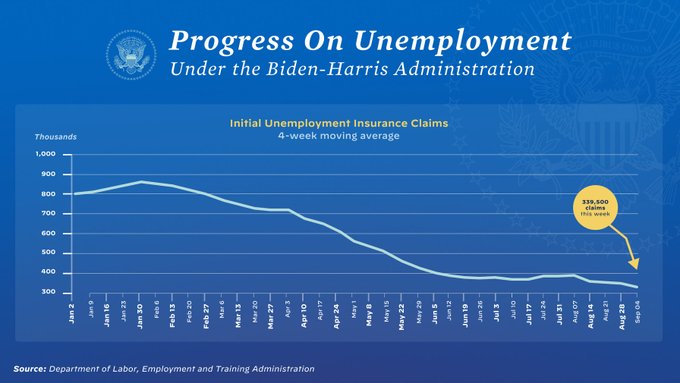 Biden is a president with a plan

After four years of flying by the seat of our pants chaos from the Oval Office, President Biden arrived with a clear plan for the economy. The President was going to first provide immediate aid to people who were struggling and then follow it up with an infrastructure plan that would create millions of good jobs and the long-term vision for economic growth, a.k.a. his Build Back Better agenda is in the budget bill.

Biden and the Democrats have accomplished more legislatively in less than a year than the previous administration accomplished in four years.

Forget the negative spin that the corporate media has decided to put on everything. A story that you won’t hear them report is that Joe Biden is literally getting the job done by creating 4 million new jobs and putting people back to work.

The coronavirus pandemic is a once-in-a-century event, but Biden has so far been up to the challenge of getting America through the crisis and pointed toward a brighter future.