President Biden announced in an update on Afghanistan that the US is helping Americans get to the Kabul airport.

President Biden announces that US security is moving Americans to the airport to get them out of Afghanistan, as another Republican talking point evaporates before their eyes. https://t.co/VF1sUJkrbb 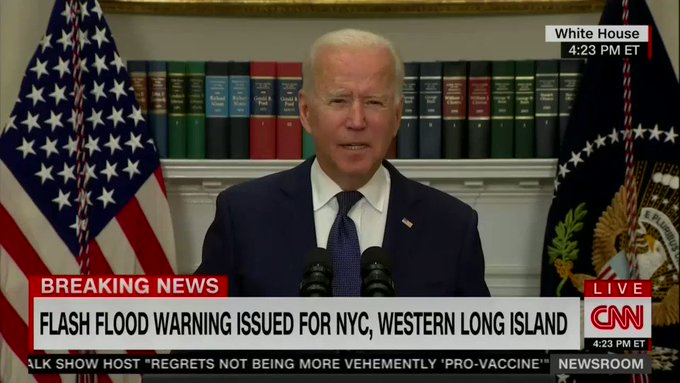 President Biden said, “We have moved thousands of people each day by U.S. Military aircraft and civilian charter flights. A little over 30 hours — in a little over 30 hours this weekend, we’ve evacuated an extraordinary number of people, as I’ll detail in a minute. About 11,000 individuals. That number will change day-to-day as the air and ground operations in Kabul vary. Our first priority is getting American citizens out of the country as quickly and as safely as possible. At my direction, the state department continues to reach out to the remaining Americans we have identified by phone, email, and other means to ascertain their whereabouts and plans. We’re executing a plan to move groups of these Americans to safety and to safely and effectively move them to the airport compound.”

The Republicans and some in the corporate media have been trying to gin up outrage over Biden “stranding” Americans in Afghanistan, but that talking point turned into another political dead-end street with the President’s announcement that the United States is getting Americans to the Kabul airport.

The President’s popularity has no changed over the Afghanistan withdrawal, and Republicans are quickly running out of things to talk about, which is a sign that the lifecycle of the Afghanistan story may soon be coming to an end.

If it doesn’t boost cable news ratings or help Republicans score political points, both the mainstream and the GOP will move on to something else because Joe Biden is making progress on getting Americans out of Afghanistan.

Inherent Contempt Could Be Coming For Trump And His Cronies ...